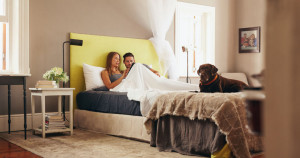 Did you know that parasites are a problem for millions of Americans? According to experts at the Centers for Disease Control, the problem is more common than many people realize. Moreover, many people that pick up a parasite often go undiagnosed, and suffer from illness and symptoms that could be treated or managed.

In fact, it’s a common misconception that parasites are only a problem in underdeveloped or poor countries. Many people (mistakenly) believe that you can’t pick up a parasite if you have access to proper sanitation, running water, and food prepared according to a high quality of safety standards. But, there are still ways to pick up a parasite that might surprise you. What can cause a parasitic infection?

These common risk factors might point to a parasitic infection:

So, how do you know if you have a parasitic infection? The symptoms can seem general, and mimmic symptoms of other illnesses. Think fatigue, fever, nausea, heart and respiratory symptoms, headaches, rashes, and itching. Fairly vague, right? That’s why we recommend that if you have unexplained symptoms that aren’t going away, you ask your holistic wellness provider and doctor to run tests for parasitic infection.

How do we test for parasites? The CDC recommends a few different tests. (You can call us to learn more, or visit the CDC page here.) The list of tests includes blood draws, fecal sample testing, and x-rays.

More than one kind of test may be performed by your health care provider. Among other things, the tests will look for antibodies in your blood serum, evidence in fecal samples of the byproducts of parasites, and x-rays will be used to determine if your organs have developed lesions caused by some parasitic infections.

In some cases, a colonoscopy may be done to more thoroughly screen for a parasite. You health care provider will determine which tests to order, and will often send the samples to a qualified lab for analysis.

It’s important to learn more about the issue, because so many Americans go without proper diagnosis and treatment due to a lack of knowledge and the common misconception that parasites are not an issue here in the United States.

If you think you may have unexplained symptoms and would benefit from a screening, either because you have one of the risk factors identified above, or just a long-term issue that has gone unresolved, please be sure to learn more and ask for a test.

You can take control of your health by learning more, and finding natural ways to promote your health, healing and overall wellness. Don’t hesitate to visit our website to learn more, and reach out with any questions.

Don’t get burned: why long-term antacid use isn’t a good option... Do you know the symptoms of mold-related illness?
Scroll to top